Originally appeared in the Spring 2021 Gazette, by Helen Weaver 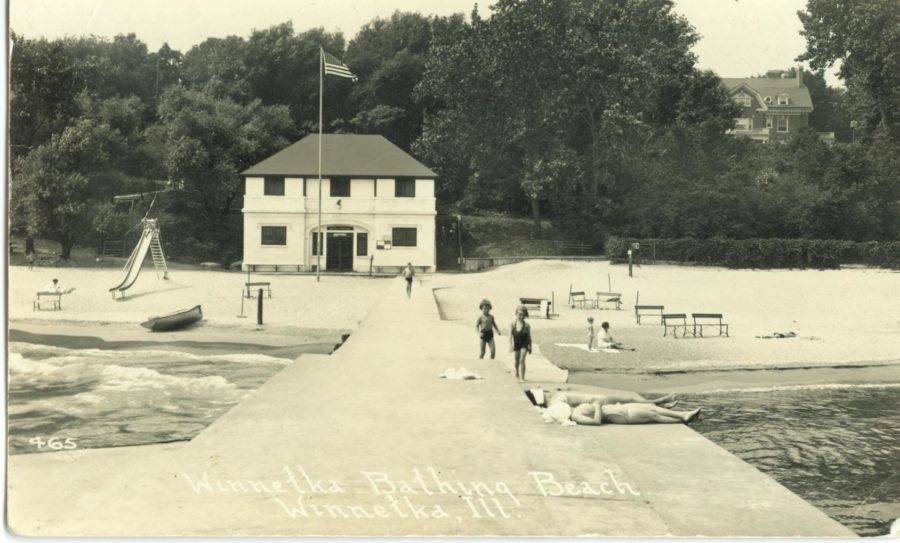 Children frolic on the pier while grownups recline at Maple Street Beach, 1939. Photo from WHS Archives.

The lake was accessible to the public by the power plant at Tower Road and an old lumber pier at Willow Road, but there were no formal public beaches until the Park District established Lake Front Park at the end of Maple Street by purchasing land in 1905 and constructing a pier and bathhouse in 1913. By 1915, the beach had become so popular that the Park District reported the facilities were “far from adequate to care for the crowds (up to 700 people per day) that gather on Saturdays and Sundays.”

“To insure the morality of the people frequenting the park,” the report also said, Park District staff had to install electric lights on the bluff. Beach staff consisted of two trained guards and a bathhouse matron.

By 1928, the District had opened a second beach at Elder Lane, and by 1941, a third debuted at Tower Road with lifeguards and “necessary facilities,” but no buildings until 1948. Season tickets to cover the cost of upkeep on the facilities and the salaries of the staff cost $2 per family ($3 after July 1) from the 1920s through the 1940s. During World War II, young women and high-school-aged boys stepped in to serve as lifeguards because many of the regular lifeguards were serving in the military.

Winnetkans’ enthusiasm for Lake Michigan swimming waxed and waned throughout the decades. At first, beach attendance was very high, reaching a then record of over 110,000 in 1939. The beaches were less popular during the WWII years, with only around 55,000 visiting each summer, but picked up again during the 1950s. The busiest summer was 1959 with over 170,000 visitors recorded. Subsequent summers recorded fewer and fewer people with less than 40,000 swimmers during 1975 and lifeguards were posted only at Tower and Elder Beaches.

Corinne Krebs and her family were frequent beach users. She says: “I remember taking my kids to Elder Lane Beach during the 1960s, and it was a social gathering place for the moms in the afternoons. We would chat and let the lifeguards watch the kids. Fast forward 10 years and one of my kids worked at Elder Lane Beach as a lifeguard and would complain about parents not watching their kids when they were in the water, but were socializing instead. So what goes around, comes around, I guess.”

While the number of swimmers has changed through the years, the one beach tradition that has stood the test of time is the Winnetka Water Carnival. The annual day of swim races and other beach activities was first held at Lake Front Park in 1922 and according to the Winnetka Talk, attended by 1,000 citizens. The 1923 carnival included 19 events for male and female swimmers of all ages, refereed by Northwestern swim coach Tom Robinson. In some years, winners were awarded actual sterling silver medals. By 1974, most of the events were geared toward children, though the carnival that summer included the “North Shore Quarter-Mile” race and the 100-yard air-mattress race open to all.

Percy Maynard touted the prospects of boating in Winnetka in 1889, but sailing was uncommon until the 1960s. That changed in 1961 when the Park District bought ten acres of wooded land on 720 feet of lakefront south of the power plant and created Lloyd Park, officially opening the beach with the 1963 Water Carnival. Lloyd Beach offered small boat storage and launching for boats of all sizes in addition to swimming

Throughout the 1970s and 1980s, in partnership with the Winnetka Yacht Club, the District offered sailing lessons and races culminating in the Supersail Regatta, a weekend-long event held every July. Winnetka Yacht Club leaders Jean and Don Bergman remember: “At its most popular, the event drew about 60 boats, including Sunfish, Enterprise, and Thistle sailboats. The Winnetka Police would provide security for boats overnight at the beach and, in return, Yacht Club representatives would be in charge of setting off the Fourth of July fireworks.” Visiting sailors “would camp in tents above Lloyd Park Beach or stay with host families.” The Bergmans recall that in addition to sailing, Supersail included a “great” Saturday night party with a jazz band and dancing held either under a tent at Maple Street or at the Community House. 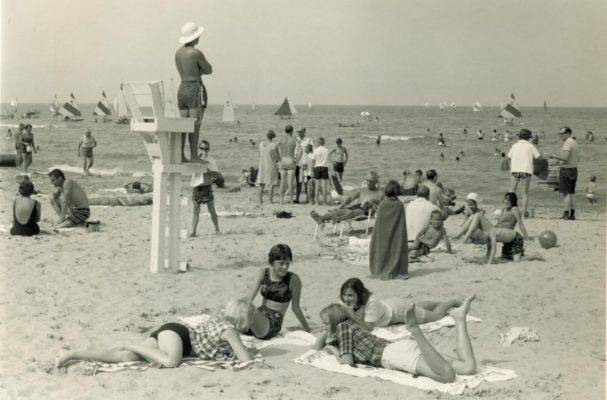 Winnetka added Centennial Park to its collection of beaches in 1969 after a group of residents formed the “Winnetka Conservation Association” and petitioned the Park District to buy out Hemphill Homes, a developer who had purchased the property after the old North Shore Hospital closed in 1968. Dog owners convinced the District to set aside the beach at Centennial for dogs, allowing Winnetkans’ pets to join in on the summer fun in 1995. ■

Recent articles and posts from our Gazette.

Watch the documentary Winnetka Story: The History of Winnetka & the North Shore, on our YouTube Channel

WHS is funded primarily by the generous donations of Winnetka families and local businesses. Support the preservation of and access to your community's history today.