You are here: Home › Gazette › News › The Village Doctor

Originally appeared in the Fall/Winter 2022 Gazette
by by Meagan McChesney, PhD – WHS Curator

While conducting research for the latest Explore Winnetka Stories feature on Winnetka’s earliest businesses, I happened upon a c. 1885 business card for Winnetka-based “Homoeopathist and Surgeon,” G. H. Morrison, M. D. Intrigued, I ran a search of Morrison’s name and was amazed to find an unusually large number of artifacts and materials. I was surprised that I’d never come across his name before, and wondered why WHS would have so many of this homeopathic doctor’s materials.

Determined to find out, I delved into the materials, finding that, though his life was short and his time in the Village even shorter, Winnetka’s first (and perhaps only) homeopathic surgeon made a lasting impact on the community and many of its most notable 19th century residents. 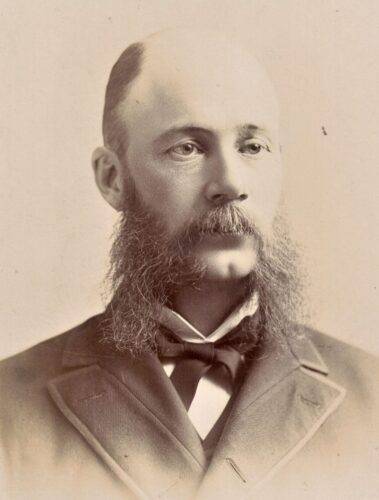 George Herbert Morrison was born in Elgin, IL on April 15, 1852. His father, Robert, was the son of Scottish immigrant parents and owner of a small carriage factory. His mother, Hannah Burritt Morrison, was well-known in Elgin as the daughter of Benjamin Burritt, one of the city’s founders.
In 1863, Robert Morrison died, leaving eleven-year-old George and his mother behind. A few years later, George and his mother moved to Highwood, IL to be close to family. While in Highwood, George founded a hardware business with a cousin, though he sensed early on that life as a business owner may not be for him. He left the business after three years and enrolled in Hahnemann Medical College, a homeopathic medical school in Chicago that operated from 1860 to 1921.

George graduated from Hahnemann in March of 1881 and, just a few days later, married Della Baker in her hometown of Highland Park. That summer, the newlyweds briefly moved to Aurora before settling in Winnetka.

While we don’t know why the Morrisons chose Winnetka, it’s clear that once here, they were active, respected members of the community. They built a home and medical practice at the corner of Ridge and Oak (where the Public Library is now), close to downtown so the practice was easily accessible to patients. Dr. Morrison’s appointment books indicate that within a few years of opening his practice, his patients included notable families such as the Lloyds, Hubbards, Shackfords, and Gages.

Morrison family home at the corner of Ridge and Oak, c. 1880s.

According to his son, “next to his profession and his family, [George’s] greatest interest in life was the welfare of Winnetka.” During his 12 years in Winnetka, he was a member of the Village Council, served on the Library Board, and was the head of the School Board. His involvement in Village affairs led to many meaningful relationships as well – Judge Thomas Windes, as well as grocer and banker Max Meyer, became Dr. Morrison’s best friends.

Sadly, in the winter of 1893, Winnetka suffered a terrible flu outbreak. While caring for sick patients, Dr. Morrison caught a particularly bad case. Despite his own worsening illness, he continued to help his patients “even after he became so weak that he could not get into his sleigh without assistance.” He died on December 26, 1893 at just 41 years old.

Though his time in Winnetka was cut short, George Morrison was remembered well and fondly. His friends and family later recalled of his work as a physician, “no night was too cold or too wet, no road was too bad, and no patient was too poor for his most careful attention.”

Dr. Morrison’s legacy also lived on through his children. Of his three children, at least two – Roger and Donald – remained in Winnetka for several decades, and donated several of their father’s materials that are now part of the WHS collection. ■

WHS is funded primarily by the generous donations of Winnetka families and local businesses. Support the preservation of and access to your community's history today.

Recent articles and posts from our biannual Gazette.

Watch the documentary Winnetka Story: The History of Winnetka & the North Shore