The Log House was built as part of a German immigrant settlement on the Ridge Road near today’s Indian Hill Country Club and several generations of the Schmidt family lived in the house from 1839 until the 1870s. Anita Willets Burnham “discovered” the Log House while on a painting trip in the spring of 1914.  She purchased the home in 1917, relocated it to 1407 Tower Road and restored it to its original condition, adding two bedrooms, two bathrooms and a kitchen. Members of the Burnham family resided in the Log House until 2000. The Schmidt-Burnham Log House is distinguished as the only home in the area to be continuously occupied for nearly 165 years. 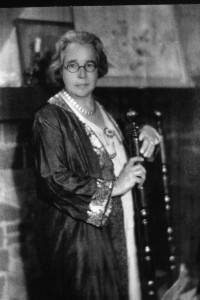 After Anita’s death, her two daughters lived in the home until their deaths in 1978 and 2000. The Winnetka Historical Society then inherited the home and relocated it to Crow Island Woods to save it from demolition.

In June of 2005, the Schmidt-Burnham Log House was listed on the National Register of Historic Places. The National Register is the Nation’s official list of cultural resources worthy of preservation. The basis for the listing was the significance of Anita Willets Burnham’s life as an artist and writer.

Read more about moving the Log House from Tower Road to its current location in Crow Island Woods HERE!

Since its grand opening in September 2006, Winnetka teachers have been enthusiastic about incorporating this piece of living history into the fourth grade immigration curriculum. Learn more about how the Schmidt-Burnham Log House has been incorporated into school curriculums HERE!

View photos of the interior of the Log House below.